It’s been almost seven months since my last post and much have happened. Across the next posts I’ll be telling you some of what’s been and what will come. Yet, today’s post i about Contacts and the improvements we made on this cycle and you will see when GNOME 3.14 gets released.

The biggest greatest work on these past months was implementing inline contact creation. For a long time I had Allan’s mockups lying around, there were, also, some bugs concerning the “new contact dialog” and its behavior. So we set the goal to fix those and implement the feature this cycle. Doing this I realize the some internals cleaning in Contacts is in order, but, since feeling it is a big task I decided to delay it and hack our current ContactEditor widget to make it able to work on the new flow.

Down, at the end, are some screenshots.

We also worked a bit on others details. There’s a list here:

I hope you can enjoy latest version on Contacts when it’s released. Go, find and bugs and improvements and let us know

A word on bugs

I’ve been trying to maintain Contacts’ bug list properly tagged and organized. In accomplishing that I’ve marked some as NEEDINFO, now, it’s been a while of this. I just wanted to let you know, I’ll be closing those bugs if they don’t get any updates before 3.14.1 is out on October 15. 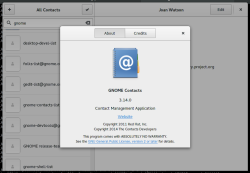 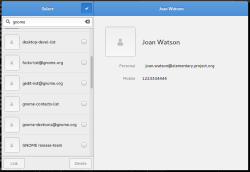 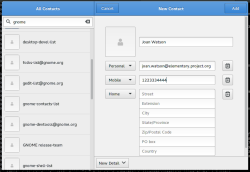